Village Blacksmiths - the Rayners of Burley

_(This paper first appeared in 1989 in volume 4, pp. 18-24, of the third series of The Bradford Antiquary, the journal of the Bradford Historical and Antiquarian Society.) David K. Rayner ‘Reyner the smith ...’ Bradford Manor Court Rolls (1344)

_The first reference to Rayners in the village is the baptism at Burley Parish Church, in 1808, of Joseph, son of William Rayner 'blacksmith of Burley', and Charlotte. Blacksmiths other than Rayners are also mentioned at this time in Burley baptismal registers:

_It seems reasonable to suppose, therefore, that this forge came into the actual possession of the Rayners between 1810 and 1820, when the above William Rayner (born 1781 Yeadon) was then the forgemaster.  There is a possibility that he may have been descended from the Rev. James Rayner, who was curate of Guiseley from 1744 to 1754, but the difference in social status makes this unlikely. (It was this clergyman who raised a mob of parishioners against the Wesleyans in 1747.)

Thomas was certainly living in Back Lane, Burley, in 1844 when his son William was born. After Thomas left to start Woodhead forge, in about 1850, Burley forge continued under James and his descendants. 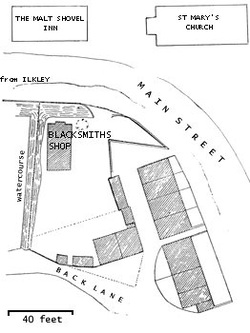 A plan of the forge (left) shows a single storey building about thirty feet long, set on the corner of a sharp bend in the road opposite the Malt Shovel Inn and St Mary's Church.

The forecourt contained a circle of large stones upon which the wooden cart wheels were placed before the heated iron hoops were hammered on to them, and quenched with water drawn, no doubt, from the adjoining beck.

The forge was in operation until just before the Second World War, when modern engineering methods began to supersede the traditional blacksmith's craft. Burley forge eventually passed to James's son, William (born 1842), and then to his grandson, Samuel (born 1871, died 1937).

Samuel's son, ‘Charlie’, acted as striker for his father in the latter day’s of the forge, and was reputed to be quite a ‘character’, but he did not continue the business after Samuel died.
David K. Rayner
(Taken from the third series of The Bradford Antiquary, the journal of the Bradford Historical and Antiquarian Society.)