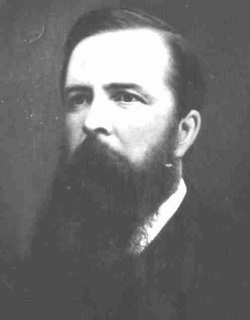 _
Thomas Clark was born in Leeds in 1837 and was a Pupil teacher under Canon Edward Jackson of St. James parish, Leeds. Jackson was a friend of William Forster and no doubt recommended him to the Burley mill owners when they set up the Greenholme Mills School in 1856. In fact they appointed him head teacher, even though Clark had not been to a Training College and was not qualified as a teacher. He did however advance his knowledge and gained London University entrance qualifications as an external student. He never completed his degree, however, but he was a revered head teacher and a leading member of the village community. A report on the school in 1897 noted that “much of the pupils‘ work is praiseworthy”.

In 1856 46 boys and 48 girls attended Greenholme Mills school as half–timers. They spent a morning or an afternoon in the school and the rest of the working day at the mills. Evening classes were also arranged for those who wanted to pursue advanced studies. The classrooms were on mill premises at first, but they occupied a part of the Lecture Hall (Queen‘s Hall) from 1868. Clark lived in Main Street in a house, called Rose Cottage, which stood next to the old Methodist Church at the end of what was known as East Terrace. (The houses were demolished in the 1960s.)

In 1873, Thomas married Elizabeth Greenwood, a widow of a Burley man and they lived together in Rose Cottage. They had no children of their own, but brought up a granddaughter, the daughter of Elizabeth‘s son Edwin. Thomas Clark ceased to be headmaster in 1897 when the school was closed by the Mill owners. He died in February 1898. A portrait was painted of him probably in the 1870s, artist unknown, now hanging in the Lounge of St. Mary‘s Church. There is also a memorial plaque to him on the north side of the church, which reads:

“For 41 years the Respected and Successful Master of Greenholme Mills School. The Friend and ever ready Counsellor of his former Scholars. His Heart was always eager for the True Good of the Youth of Burley for whose welfare he laboured as one who had himself a Master in Heaven.”

A drinking fountain was erected by public subscription, on the south side of the Recreation Ground. It still stands but no longer is connected to a water supply.