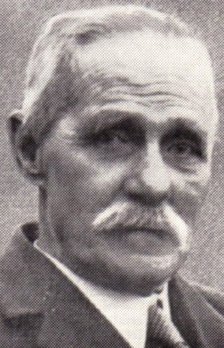 _
J. H. Foulds was born in 1851 (possibly August 1850) in Bradford the son of a cobbler who came to live in Burley about 1865.Census records indicate that in 1871 he was living in Sun Lane with his parents. He styled his occupation as Clogger and Shoe maker. By 1881 he was a Boot and Clog maker, employing 2 others at 174 Main Street (Coronation Row). By 1891 he was married with three children and a servant, still at the same address. He seems to have stayed there, though the house numbers had changed, living next door to his shop in 1901. By then he had 5 children. The Trade Directories indicate that his shop stayed on Main Street until the 1930s, though he went to live up Bradford Road in one of the houses built there in the inter-war period. He and his wife celebrated their Golden Wedding in 1932. At the 1937 Coronation celebrations in Burley he was 86, and had the distinction of being the oldest present at the tea for the elderly of the village. We are not sure when he died but we think it was a couple of years after that. One of his children, Winnie, became a teacher and for many years until she went into a nursing home in her 90s, she lived in the bungalow built in the garden of Foulds‘ house, with its entrance in Endor Crescent.

From at least 1890 he had become involved in local politics and had been elected to the Local Board of Health as a Councillor (one of nine). He was a member of the Liberal Club and had obviously known Mr. Forster. The Board of Health became the Burley Urban District Council in 1897 and he remained a member being re–elected until he finally stood down when Burley was amalgamated into the Ilkley UDC in 1937. He was Chairman of the Council 9 times. Much of the information we have about him comes from press reports and the minutes of the Local Board and Council (held in Bradford Archives). As he is frequently quoted in these we think he must have been a forthright participant in debates.

He is quoted, we have noticed particularly, in matters to do with education, highways and finance. He early became involved in the debates in Burley about the provision of education after the closure of the Mill school in 1897. The mill school had been run on nondenominational lines, like the Township Infants School, whereas the National School was Church of England. The non–conformists, of which Foulds was one, wanted to have the choice of schools, whereas the Church wanted to build a big new school (Aireville Terrace) with enough room for all the Burley children. The long debate is fully reported in Our Schools, but briefly the non–conformists wanted to set up a School Board which could have built a school on the proceeds of an educational rate. The Church probably using its influences in Whitehall, managed to prevent the setting up of a School Board so that the Aireville Terrace school could be the main provider of education in the village. Foulds was angered by this and spoke of the decision as “an insult to local ratepayers and an insult to the memory of the late Mr. Forster” whose 1870 Act of Parliament enabled the setting up of School Boards in the first place.

A decade afterwards he is recorded as opposing the recommendation of a Schools Inspector that the “babies” at the Township Infants‘ School should have chairs and tables. “That is all rot – they can sit on forms same as other children” he is reported to have said. He no doubt was concerned about the probable expense rather than the educational benefits. Indeed this comes through in the reports of other issues, like the improvement of Burley‘s roads. Dr. Lewer when chairman of the council in 1907 opposed Foulds‘ recommendation that every car should be taxed according to its horse power so as to finance road improvement. Lewer had said “that would be class legislation”. Foulds‘ reply is symptomatic of his feelings: “It was the class that used the roads; it was the class that rode motor cars and did damage to the roads; it was the class that should pay for them”. He was also against the first major attempt to link Burley with surrounding places by public transport on the roads in 1915. His main reason seems to have been that Leeds City Transport, who would run the trolley buses, would be the beneficiary and not Burley. When the “Trackless” started running, he was scathing, saying that it had taken 1hr 15 mins to get to Otley (after changing at the Fox) and had had to walk part of the way. He was also against speeding in the 1930s, especially at the "bottle neck" near his shop. In a debate about the introduction of Winter and Summer Time, involving clock changes, he is reported to have said “We want to sell gas and electricity, don‘t we? So what is the good of ‘daylight saving‘?”

Reports also show that he was a keen member of the Volunteer Rifle Corps, and reached the rank of Colour Sergeant. He won prizes for shooting at Bisley. Like many of his time, he was a keen supporter of royal occasions and in 1911 reminded the Council that they should be doing something in celebration of the Coronation of King George V. See slide of the gun salute.

He was involved in his last few years on the Council with the thorny issue of the closure of small UDCs, of which Burley was one. There was prolonged discussion and 8 schemes of amalgamation with other bodies were considered. He would have preferred for Burley to join with other small councils, independently of either Otley or Ilkley. In the end amalgamation of Burley with Ilkley and Menston was decided. It took place in 1937, at which point with almost 50 years of Council service behind him, he retired. No doubt many notes of appreciation were written, but the one we like is from an earlier celebration of his service to Burley in 1919, when the speaker referred to “his qualities of common sense, tact and energy – in younger days a keen athlete – but with a quiet unostentatious manner”. We wonder whether the speaker had his tongue in his cheek.